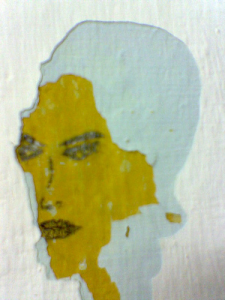 Minerals are playing a very important role in a human body. The main goal of these essential elements is to make sure that the body functions properly. If deficiency is ignored for a prolonged period of time a serious health problem can be developed. For instance: women who are menstruating need an extra supplementation of iron till the reach menopause stage. A good source of minerals concentration is in certain types of whole foods. However, it is hard to follow a diet that contains all the necessary nutrients that a woman needs. Taking multivitamin and food-based natural mineral supplements are few ways that can be very beneficial.

Below is the list of six essential minerals and their function: 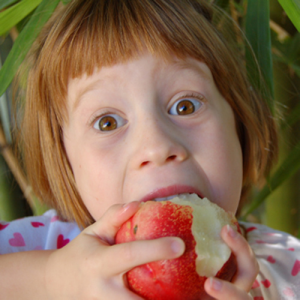 Nutrition is indeed very important to our body. We eat in order to survive. However, if the food that we eat does not contain enough or the right amount of nutritional elements, our organism will not be able to function well, grow and cope with every day stress.

Women need nutrients such as omega-3 so they would function properly. Here is a link to a great post: “11 Omega 3 benefits for women.”  We needs nutrients, simply put, and we get them from the foods we eat whether they are healthy to us or not. The healthier your diet is the better your body will function. There is a saying: “You are what you eat.” We still obtain some of our needed nutrients from fatty foods or from junk foods though they are not in the level that our organism requires. And taking more of these foods wouldn’t be healthy, not because they don’t have the nutrients we need, but because they have more of the sugar or fat that our body does not need much at all.

Having a good nutrition means we eat the right type of foods that provides us needed nutrients. Nutrients have 6 classes and they are protein, carbohydrates, fat, vitamins & minerals and water. All these essential elements have their own role in our wellbeing. Protein is the food of the muscles and they also make our immune system strong. It helps in the repair of cells that have been damaged and it also builds new tissues. Carbohydrates give us energy and the lack of it can lead to ketosis which is a condition resulting from the body’s production of ketones. Fat, just like Carbohydrates, also gives us energy. We may think we don’t need fat since it is, after all, fat! But truth is we still need portions of fat in our diet to absorb vitamins such as Vitamins A and D. Vitamins and minerals are important which is why we take them in pure forms sometimes because we don’t get enough of them from foods we eat. They regulate different biochemical processes. Water is very important and we should keep us hydrated in order to stay alive. After all, our body consists of 80% of water.

Knowing the amount of each of these essential elements that our we require and eating the right foods make up the good nutritional base. If we eat too much of the bad stuff and not get enough of the necessary nutrients, then we are depriving our body of good nutrients. Too much fats and carbohydrates is not good for our health, becasue it increases body weight.

Recommended nutrients of people vary depending on age, weight, gender, blood type and even ethnicity. As we get older, our recommended nutritional requirements change so it’s best to learn about how much of each nutrient your body needs based on your new data. For example, pregnant women, have high requirements of certain nutrients for the benefit of the baby growing inside her and to keep her fit and healthy as well.

Vitamin D is a fat-soluble vitamin. This Vitamin is produced by our bodies from cholesterol via process that is activated by action of ultraviolet B rays from the sun on our skin. The following factors are taken into consideration when figuring out how much of Vitamin is our body producing: skin color, age, amount and time sun exposure, and geographic location. This important vitamin can play an important role in influences of control of cell cycles, brain, muscles, pancreas, cardiovascular and immune system, intestines and bones. Its primary functions are to maintain normal blood concentration of phosphorus and calcium and to support bone health. 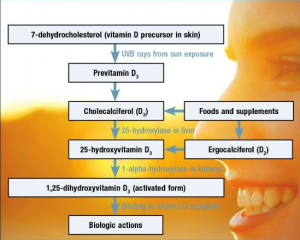 There are two types of vitamin D. Calcitriol (1,25-dihydroxyvitamin D3) with half life of 15 hours and Calcidiol (25-hydroxyvitamin D3) with  half life of 15 days.Naturally occurring form of vitamin D; made by the skin upon sun exposure; found in foods and most supplements Calcidiol (25-hydroxyvitamin D3) Prehormone made directly from cholecalciferol in the liver; low biologic activity, but major form circulating in the bloodstream; concentrations measured by typical blood test for vitamin D deficiency Calcitriol (1,25-dihydroxyvitamin D3) Activated form made from calcidiol in the kidneys and tissues; the most potent steroid hormone in the body Ergocalciferol (vitamin D2) Made in the laboratory by radiating fungus; not naturally occurring in the body; used in prescription vitamin D (Drisdol), available in 50,000-IU capsules

People who live in northern parts of the world where sun exposure is limited are at risk. Failure to get at least 15 minutes a day of direct sun light, being dark skinned, olderly or overweight is a risk factor as well. Conditions such as rickets or osteomalacia, musculoskeletal and periodontal pain are associated with severe vitamin D deficiency. Conditions such as loss of appetite, diarrhea, insomnia, vision problems, and burning sensation in a mouth or throat are signs of mild deficiency of vitamin D. Specific blood test needs to be done in order to detect the level of this vitamin in the body.

Vitamin D decreases cell proliferation and increases cell differentiation, stops the growth of new blood vessels, and has significant anti-inflammatory effects. Many studies have suggested a link between low vitamin D levels and an increased risk of cancer, with the strongest evidence for colorectal cancer.

Several studies are providing evidence that the protective effect of vitamin D on the heart could be via the renin-angiotensin hormone system, through the suppression of inflammation, or directly on the cells of the heart and blood-vessel walls..

Vitamin D is known to help the body absorb calcium, and it plays a role in bone health. Also, vitamin D receptors are located on the fast-twitch muscle fibers, which are the first to respond in a fall. It is theorized that vitamin D may increase muscle strength, thereby preventing falls. Many studies have shown an association between low vitamin D concentrations and an increased risk of fractures and falls in older adults.

Since vitamin D has a role in regulating the immune system and a strong anti-inflammatory effect, it has been theorized that vitamin D deficiency could contribute to autoimmune diseases such as multiple sclerosis (MS), type 1 diabetes, rheumatoid arthritis, and autoimmune thyroid disease. Scientists have suggested that vitamin D deficiency in the winter months may be the seasonal stimulus that triggers influenza outbreaks in the winter. Numerous trials have evaluated the association between vitamin D and immune-system diseases.

Some studies have shown that vitamin D may lower the risk of type 2 diabetes, but few studies have examined the effect of vitamin D on depression. A trial of nondiabetic patients aged 65 years and older found that those who received 700 IU of vitamin D (plus calcium) had a smaller rise in fasting plasma glucose over 3 years versus those who received placebo. A Norwegian trial of overweight subjects showed that those receiving a high dose of vitamin D (20,000 or 40,000 IU weekly) had a significant improvement in depressive symptom scale scores after 1 year versus those receiving placebo. These results need to be replicated in order to determine a correlation between vitamin D and the risk of diabetes or depression.

Only a few foods are a good source of vitamin D. These include fortified dairy products and breakfast cereals, fatty fish, beef liver, and egg yolks. Besides increasing sun exposure, the best way to get additional vitamin D is through supplementation. Traditional multivitamins contain about 400 IU of vitamin D, but many multivitamins now contain 800 to 1,000 IU. A variety of options are available for individual vitamin D supplements, including capsules, chewable tablets, liquids, and drops. Cod liver oil is a good source of vitamin D, but in large doses there is a risk of vitamin A toxicity.

Since vitamin D is fat soluble, it should be taken with a snack or meal containing fat. In general, 100 IU of vitamin D daily can raise blood concentrations 1 ng/mL after 2 to 3 months Once the desired blood concentration is achieved, most people can maintain it with 800 to 1,000 IU of vitamin D daily. Even though dosages up to 10,000 IU daily do not cause toxicity, it generally is not recommended to take more than 2,000 IU daily in supplement form without the advice of a health care provider. Individuals at high risk for deficiency should have a vitamin D blood test first; a dosage of up to 3,000 to 4,000 IU may be required to restore blood concentrations.

This Post was based on information from US Pharmacist.