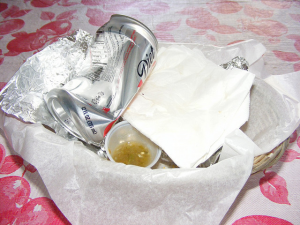 DANGERS OF DIET SODA by By Pilar Gerasimo. She provides 10 reasons why not to drink diet sodas. Excellent Article

OK, I am not going to rant. But I need to get this out of my system: I think diet soda is awful. I think all soda is awful, actually (yes, I know there are no “bad” foods, but I hold soda in approximately the same regard as those puffy orange Circus Peanuts — these are not really “foods,” per se). Diet soda, in my view, is especially insidious. READ MORE…

The Dangers of Diet Coke, Pepsi and Other Diet Food by Dr. Whitetaker, M.D.

Artificial sweeteners are marketed with the promise of weight control, and the vast majority of people who consume them do so to either lose or avoid gaining weight. Folks, this is a fraud of gigantic proportions.

From 1960 to l976, there was virtually no change in the number of Americans who were overweight: roughly 24 percent of the population. However, from the mid l980s to the present, this number has more than doubled to 54 percent! This coincides with the massive infusion of noncaloric chemical sweeteners and sugar-free “diet” foods that are eaten by close to three-quarters of the adult population.

Although several factors contribute to these alarming statistics, I am convinced that our blind acceptance of the most popular of these artificial sweeteners, aspartame (NutraSweet, Equal, Spoonful), plays a significant role in our current weight problems. Far from helping us lose weight, aspartame has been proven to increase appetite, especially cravings for sweets. Imagine “diet” products that help you pack on extra pounds! And aspartame’s downside doesn’t end with weight gain: This sweetener is associated with multiple health problems and majority of it comes from Diet Sodas. READ MORE…

Metabolic syndrome is a cluster of conditions that occur together, increasing your risk of heart disease, stroke and diabetes.

Sugar Substitutes and the Potential Danger of Splenda

Written by Marcelle Pick, OB/GYN NP Another Great Post about The Dangers of Diet Sodas and How it Can Damage Your Health

The wave is coming because “low–sugar” or “sugar–free” is the latest fad — a welcome trend, given the health hazards of all the sugar in the average diet. But of the hundreds of new diet foods that will soon appear, most will use Splenda as a sugar substitute. This is important because for tens of millions of women, their diet soda or artificially-sweetened food is a keystone of what they think are healthy nutrition and food choices — both for themselves and for their families.

On the other side of the argument are responsible experts who say that Splenda is unsafe — the latest in a succession of artificial sweeteners that claim at first to be healthy, only later to be proven to be full of side effects. These authorities say that Splenda has more in common with DDT than with food.

What do we believe? We think that our regulatory system doesn’t do a good enough job ensuring our long-term safety. We’re concerned about the bigger picture, too — the dependence on sweets in the American diet to make us feel good — whether those sweets are satisfied by sugar or artificial sweeteners like Splenda. And we are especially sensitive to the women who can benefit from using artificial sweeteners as a bridge to a better life with healthier nutrition.

What should you think about artificial sweeteners? We want you to be fully informed about the dangers of Splenda (which isn’t what food marketers want!) so you can make the best choices for yourself and for your family. So let’s make sure you are. READ MORE…

Soft Drinks – America Written by Judith Valentine, PhD, CNA, CNC A Must Read Article about The Dangers of Diet Sodas and Your Health.

The addict feels low. His body needs a boost. He reaches into his pocket and finds a dollar bill. He slides it into the machine and a can rolls out. He opens the can and guzzles. He feels his energy return. His fix will last a couple of hours, enough to keep him alert for the rest of the morning. The addict is twelve years old and his drug is a soft drink, purchased from a vending machine in his school. This addict and thousands like him will attend special classes, sponsored by his school, to warn him about the dangers of drugs, tobacco and alcohol. But no one will tell him about America’s other drinking problem.

According to the National Soft Drink Association (NSDA), consumption of soft drinks is now over 600 12-ounce servings (12 oz.) per person per year. Since 1978, soda consumption in the us has tripled for boys and doubled for girls. Young males age 12-29 are the biggest consumers at over 160 gallons per year-that’s almost 2 quarts per day. At these levels, the calories from soft drinks contribute as much as 10 percent of the total daily caloric intake for a growing boy. READ MORE…