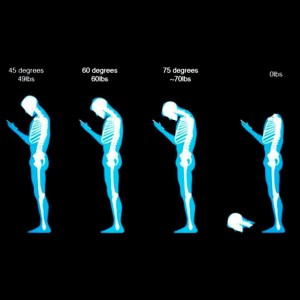 Are you currently reading this while hunched over your phone?📱If so, here’s a very scary wakeboard call: Chiropractic Care Can Help with Text Neck Problem.💻Most people spend an average of two to four hours a day slumped over their smartphones, according to the study, and that awkward position isn’t doing any favors for your neck and back.📱We know you won’t be throwing out your phone, tablet, or e-reader anytime soon. That’s fine, just be sure to use it with proper posture, which means your ears are aligned with your shoulders and your shoulder blades are back in the neutral position.💻

How is Texting Hurting Your Health?

Let’s first put the situation into perspective. Mobile device usage has increased significantly and will continue to do so into the future. According to text-neck.com, Americans spend 2.7 hours per day on average communicating and socializing on their phones, and they spend even more time looking down at their mobile devices for web searching and other uses.

They go on to say that 75% of the world’s population spends hours daily hunched over their handheld devices. Studies also show that people under the age of 30 send an average of 3,000 text messages per month. That’s approximately 100 text messages a day!

Perhaps an even more unsettling thought is the fact that young children and toddlers are now given phones and tablets as play toys. One study found that 75% of children under 8 have access to a smartphone or tablet. It’s also been reported that in the U.S. alone, nearly 1 in 5 kids under the age of 8 use a mobile device at least once a day.

The problem with all this time spent with the head flexed forward is that it increases the risk of developing what has been termed as Text Neck.

What is a Text Neck?

Text neck is the term used to describe the neck pain and damage sustained from looking down at your cell phone, tablet, or other wireless devices too frequently and for too long. And it seems increasingly common. Recently, a patient came in to my practice complaining of severe upper back pain. He woke up and was experiencing severe, acute, upper back muscle strain. I told him I believe the pain is due to the hours he was spending hunched over his cell phone. Diagnosis: Text neck. Of course, this posture of bending your neck to look down does not occur only when texting. For years, we’ve all looked down to read. The problem with texting is that it adds one more activity that causes us to look down—and people tend to do it for much longer periods. It is especially concerning because young, growing children could possibly cause permanent damage to their cervical spines that could lead to lifelong neck pain.

Chiropractic Care Can Change Your Posture From Clarke Kent to Superman

96 Tips For a Perfect Posture