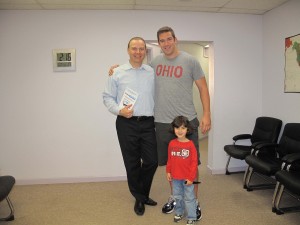 This is a story about my personal experience in a blogosphere world. It is a true and amazing live event that opened my eyes on possibilities with Social Media and how one can integrate it into his or her business.

I found out about Twitter existence on April 15th, 2010. Some of you might laugh, and wonder why I was missing out on this wonderful platform for such a long period of time. Some of you are probably still wondering what Twitter is all about. Now I don’t feel so bad.

The official opening date for my blog was on August 1st, 2010. That was the time where I took things to a different level with Twitter, FaceBook, LinkedIn, and YouTube Channel. I personally think that these four channels are the most important channels in Social media, and your blog is the center of it.  But this story is not about my blog. This story is about my Social Media experience using Twitter, meeting Lewis Howes and providing Chiropractic service to a legendary American Football Player and coauthor of LinkedWorking book.

I found out about Lewis Howes via Jeff Bullas’s blog who is a huge Social Media expert, based in Australia. His entire blog is dedicated to Social Media evolution, research and news. In one of the posts, “10 Simple Steps To Increase Your Digital Influence” he mentioned that Lewis is the master of LinkedIn  – which is the largest professional Social network in the world. I clicked on the www.LewisHowes.com and read his entire blog, followed him on Twitter and ordered his book.

On September 24th, of this year I got up around 5am to have a drink of water and automatically checked my Twitter updates on my Iphone. Lewis was letting all of his followers know that he is heading to San Francisco. I replied back by saying: “It is 5am here.” Lewis replied by asking if I have any openings. I was thinking to myself: “Am I actually going to meet this guy.” To make a long story short Lewis made an appointment. The last time he saw a chiropractor was about three years ago and his spine and old wrist injury were way overdue for some good Chiropractic Rehabilitation.

A little bit of History about Lewis’s injury. This comes directly from his book “LinkedWorking”.

In the spring of 2007, I had an opportunity to fulfill a childhood dream. After a highly successful career in high school and college football, I earned a spot on an arena football team. This is simply football played indoors during the spring and summer months and serves as a training or proving ground for those vying to play in the National Football League.

During the second game of the season, I dove to catch the football. Unfortunately, however, I slammed into the walls that surround the playing surface in arena football and severely broke my wrist.

I finished out the season with my hand taped, at the end of the season I took the team doctor’s advice and had surgery. The surgery turned out to be more complicated than anyone imagined. They literally had to take a piece of bone from my hip and fuse it to my wrist bone.

What was only supposed to be a few weeks in a cast turned into over six month in a cast, and then another six months of rehabilitation.

After initial spine and wrist examination, I have set up Lewis for Electric Stimulation and Moist heat. These two procedures would allow me to reduce the tension in his paraspinal musculature and therefore perform a deeper chiropractic adjustment. I have also added deep tissue massage that was performed by my CMT who is one of my staff members. During Chiropractic adjustment his 6’6” frame made some really laud sounds. Right after adjustment I worked on his injured wrist. Lewis had really bad case of postsurgical fibrosis (scar tissue) in his injured wrist. The ROM (Range of Motion) was very minimal and extremely painful at the end range. I used special tools to break down the adhesions in his wrist. I don’t think he really enjoyed that part – very painful procedure. After five minutes of breaking down postsurgical fibrosis, I have asked him to move the wrist and both of us saw immediate improvement in ROM with less pain. The side effect was redness and swelling which is what I wanted to achieve – breaking down calcification will cause an inflammation process which will activate Macrophage and will facilitate the destruction of Calcified particles. Next procedure was Erchonia Pl 5000 Cold Laser for about 5 minutes on his injured wrist.

After therapy we had lunch at Top Thai Restaurant – Lewis is big fan of  Thai Cuisine.  My three and half year old son, who calls himself Dr. George every time someone asks his name, joined us as well. During lunch we both talked about Social Media experience. My guest has informed me that he has met many interesting people via Twitter, who he would not get a chance to meet otherwise. This story is a primary example, not so much for Lewis, but for me. It was a pleasure to make a new friend.

Next morning I have asked Lewis via Twitter How he was doing. Here is a small script of our conversation. 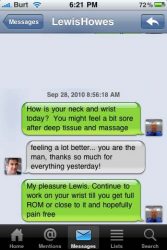