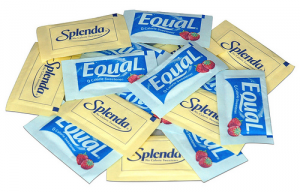 Aspartame is a known neurotoxin. This product can pass directly on to the fetus in pregnant women with even a small dose. There were cases when people have suffered aspartame related disorders with doses as small as a single portion of chewing gum stick.  Flicker vertigo or flicker-induced epileptic activity is a real possibility for pilots who drink diet sodas. The chances for pilots of having sudden memory loss, dizziness during instrument flight and gradual vision loss are pretty high. Pilots who were frequent consumers of EQUAL and NUTRASWEET have experienced grand mal seizures while operating commercial airplane and have lost their privilege to fly forever. The FDA (Food and Drug Administration) has received over 10,000 complaints from consumers about NutraPoison. FDA has done nothing to alert American public about 80 percent of these food additives. People assume that if these products are advertised on TV then they are as safe as mother’s milk. The FDA consistently approves killer additives all the time. Next time I will try post some information about MSG (Monosodium Glutamate).

If you are one of the users of EQUAL and NUTRASWEET and you are experiencing headaches, depression, slurred speech, loss of memory, fibromyalgia types symptoms, loss of sensation in lower legs or shooting pains, loss of equilibrium, vertigo, anxiety attacks, chronic fatigue, vision loss, floaters, retinal  detachment, seizures, heart palpitations, etc you might have ASPARTAME TOXICITY! Some physicians misdiagnose patients with multiple sclerosis (MS) when in reality it is methanol toxicity which mimics MS. You can survive MS but not methanol toxicity. 51% of FDA approved drugs had serious health risks. John Hopkins University research estimates that 80-120,000 American citizens are killed by prescription drugs every year. Here is a link to a great Detoxification Kit by Dr. Hull. (affiliate link)  A Detox Program to cleanse your body of toxins such as heavy metals, food chemicals, toxins from artificial sweeteners, and much more.

Aspartame is a molecule composed of three main components: aspartic acid, phenylalanine and methanol. Once ingested the methanol, wood alcohol that has killed or blinded thousands of skid row drunks, converts into formaldehyde and formic (Ant Sting Poison). Farmaldehyde, is a very serious deadly neurotoxin and class A Carcinogen.  Phenylealanine is also neurotoxic when unaccompanied by the other amino acids in proteins. Aspartic Acid causes brain lesions in neuroendocrine disorders in experimental animals. Overall there are 92 documented symptoms including:

NutraSweet is found in over 10,000 products. The best way to understand NutraSweet is to think of it as a minute does of nerve gas that eradicates brain and nerve functions. You are probably want to ask this question why would FDA allow this product on the market – the answer is simple – MONEY. Monsanto reaps about $2 billion each year from the Aspartame toxic business. Here is the list of diseases triggered by ASPARTAME:

NUTRASWEET, EQUAL, SPOONFUL are the one of the deadliest toxins in our society because of their presence in many thousands foods, even children’s vitamins, medicines, Kool Aid and Jell-O and every restaurant table. Americans are dosed with millions of pounds every year! The following warning MUST BE written on every ASPARTAME, NUTRASWEET, EQUAL, SPOONFUL products: CHEMICAL POISON – KEEP OUT OF REACH OF HUMANS: GENOCIDAL.