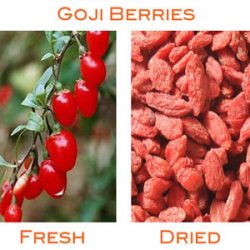 These berries are so common today and everyone knows what they are, but …. Do you know what they do to your body? Trust me it’s not bad but in fact very good! Goji berries have been around for hundreds of years as being a medicinal herb in Chinese medicine. Some of the great benefits include:– Boosting your immunity – increasing your blood cells – Increasing your concentration levels– Helps fight against cancer mutation cells– Improves your eyesight – Helps with weight loss – And decreases allergy symptoms So grab a small handful and put them in to your daily smoothie or have it with hot water and lemon.

The original habitat of the goji plant, often referred to as the wolfberry, is to date unknown. The region of origin is proposed to be somewhere in the southeastern parts of Europe or the southwestern region of Asia. Currently, China is responsible for the majority of commercially grown goji on plantations near the Yellow River floodplains. However, it is typically grown in most parts of the world.

It is a species of two boxthorn varieties in the Solanaceae family, better known as the nightshade family. This family of wolfberries is related to eggplants, potatoes, tomatoes, peppers, flowers, tobacco, and of course the deadly nightshade.

The wolfberry grows to a height of approximately 3 to 10 feet. Southern Chinese varieties of the wolfberry tree are shorter than their northern counterparts. Flowers are one to three on a stem and start out as bell-shaped before bursting to accommodate and release the growing berry. The striking orange-red “pepper-shaped” berry is a half-inch to an inch in size.

What Are Goji Berries?
A raw goji berry is about the size of the tip of your pinky finger, if not smaller. However, these size berries are difficult to find in North America and are native to parts of Asia (usually in China) and Europe.

The Health Claims
Goji berries have been used in traditional Chinese medicine for thousands of years, says health and nutrition expert Rosanna Lee.
Some even claim these berries are natural remedies for diabetes, hypertension, malaria or even fever. However, Lee says a lot of these claims may not be true. “At present, there is still inconclusive evidence from research for such claims to be made.”

Goji berries are high in essential fatty acids, the healthy omegas, which are required for the body’s production of hormones and the smooth functioning of the brain and nervous systems. In particular, linoleic acid is abundant.

Modern science has shown that this bright red berry not only contains extremely high levels of antioxidants, vitamins, and minerals, but also contains many unique phytochemicals, polysaccharides, and complex compounds that scientists are just beginning to understand.

Goji berries have a mild tangy taste that is slightly sweet and sour. When dried, they have a similar shape and chewy texture as raisins.