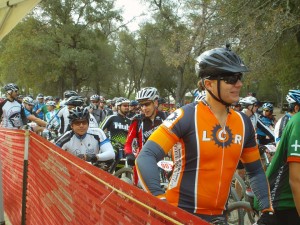 We have arrived to Oakland from Denver around 10pm. My gear was ready at my house for the race of the year TBF 50 – 50 miles on a single speed mountain bike. With only five hours of sleep left I was hoping to catch some zzzzzzs at my friend’s car. We were supposed to meet at 6am in San Ramon and transfer my gear into his car. I have made it to our rendezvous on time. We have transferred my gear onto his vehicle and took off to Folsom. Marcelo and his son Nick were too caffeinated and wanted to talk nothing but bikes and race. Both of them were super excited and both of them were doing solo 50 miler as well in a different category. 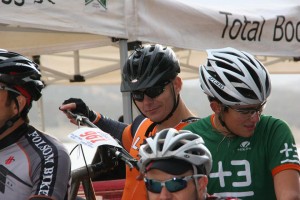 We have arrived to a Granite Bay very fast. It took us about an hour and a half. Marcelo and myself both were racing our custom NTP bikes built by Dan. We opened our camp right next to our Titanium bike builder and avid bike rider Dan Nelson. Today I am racing a bike built by him – single speed 29er. Ultra light and super strong – XL size frame under 20 pounds. There were many other riders from LCR and Barangay who were racing solo and relay. Marcelo, his son(wearing +3 jersey) and Dan were racing 50 miler solo on geared bikes each in their own age category. It was actually great to see many avid riders in person vs. seeing their rides on Strava or Plus3network. 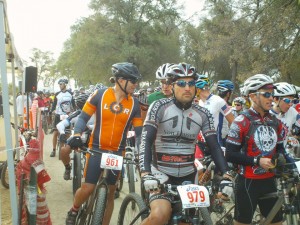 As time was approaching closer to a start time everyone seemed to be a bit nervous. People were sizing their competition from their ears to toes. I did not know till the end how many people were going to be in my single speed category. All I knew it was going to be a tough and very painful race before I cross a finishing lane.

The weather conditions were prefect that day. The sun was covered by the clouds and the air was crispy clear with a little bit of mist in the air. That would guaranteed the maximum performance with minimum hydration – about a bottle of a liquid per lap. 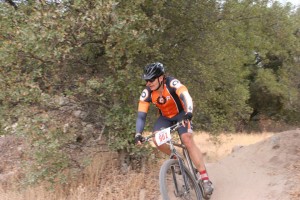 As soon as the race began everyone was rushing to a single track in order to avoid a traffic congestion and being delayed on their timing. I was one of those riders. Last year I have lost about 2 minutes there and was not going to do the same mistake again. During this push through to a single track I saw several riders from my category. They looked pretty slim and in great shape overall. The only thought that was on my mind that this was going to be a tough race. I was going to keep my pace at near the maximum heart rate with some nice recoveries 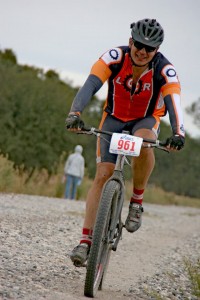 of flat sections and down the hill sections. This kind of distance on a single speed and mountain technical terrain requires patients and strategy in order to have a successful finish. If you go too fast you will burn your glycogen level way too fast and will slow down at the end which will result in bad results. General mental fatigue and muscle bonk is another important issue to watch out for. Lack of focusing during a maneuvering a technical terrain can cause serious injury during a crash. About the crash a bit later in this post.

The first lap was fairly easy. I have discovered that organizers have added a relatively difficult sandy section with rolling hills. Going through this section during each lap would be very painful and difficult. During a second lap I have noticed that my front wheel was not  holding air pressure. That probably happened when I hit a small bolder with my front wheel on my rigid fork. I took a risk by not stopping and pumping more air in. I had to wait 6 more miles till 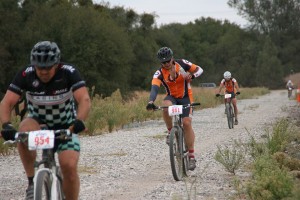 I finish the lap and stop by an aid station where I can use stationary pump and save at least a minute. My gamble with a front wheel worked out and I was on my way to a third lap. During this lap I began passing quite a few racers on geared bikes. Two other guys from a single speed category caught up to me and three of us were fighting for a position. One of the guys has been dropped and never been seen again. The other guys took over and pushed forward ahead of me increasing the distance. I had to watch out for my heart rate and pace. I kept 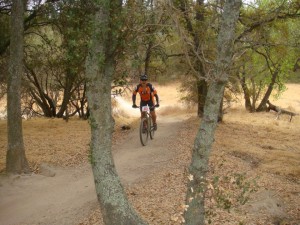 steady after this guy and was going to wait for a water tower climb which is a very steep climb. I have noticed that he was hitting his leg, which indicated he was bonking. Two thirds through climb he stopped and screamed because of the agonizing pain in his right calf. I passed him but this guy caught to me 10 minutes later again. I must say – strong guy. We have been rotating by pulling each other for the next 30-40 minutes and became so to speak friendly. However, on the next big climb the guy bonked again. I gave him a pack of GU with electrolytes and wished him good luck. I have never seen him again on a course. 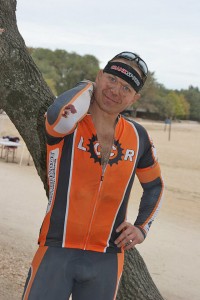 I got my confidence back and began accelerating towards the end of a third lap. I have passed more and more riders as people began running out of energy. One can’t be too confident on such a technical course. On a third lap at the last downhill technical section I have crashed really hard. I will spare the explanation and instead you can just judge by looking at the photo. It took me about 30 seconds to shake myself up and check my bike first and then myself – fortunately nothing was broken. I continued on a third lap, picked up my last bottle of water and was on my way to a fourth lap. The tire pressure was holding up pretty good, considering that I have pumped 40 psi on 30 recommended. 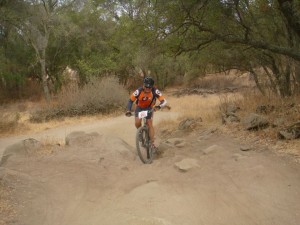 Half way through a last lap I caught up with few guys who I knew from riding  and racing together. The mental fatigue and muscle pain was growing from passing every mile. On a 44th mile of the race my right calf began its screaming concert. Every downhill section I was using my fist to massage it and give it some rest. I was really concerned about water tower climb. That is the last very steep section before the end of the lap. I began my climb to the top slow and steady. 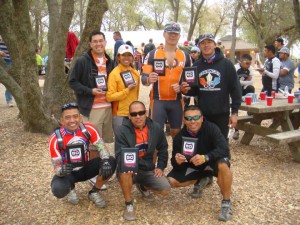 Two thirds through a climb I have noticed a rider from LCR who was sitting down and trying coop with the pain. I have pulled over and told him that I will walk with him to the top, basically, providing him a mental push. It worked. He gained his momentum back and began pulling away from me. After the water tower climb it was straight shot to a finishing lane with some minor climbs and single tracks. I was very excited that this painful race was about to be over and I could not wait till I see my results. The last mile I was spinning as hard as I could possibly spin on a single speed. By that time my adrenaline rush took over and I could not feel the pain from my crash, muscle pain and mental fatigue. It was all about crossing that finishing lane. 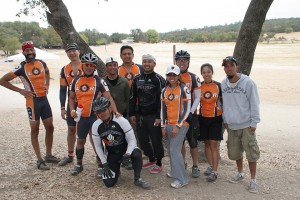 After checking my results I have found out that I have finished 4th which qualified me for a podium. I was stocked. Overall my timing was better than last year’s timing, considering that terrain was a bit harder this year due to the change of the course by organizers. Regular chiropractic care, deep tissue massage, proper diet and of course steady training all played a great role in a successful completion of this race. Thanks to everyone who came along and enjoyed this awesome once a year event. I will be back in 2013. 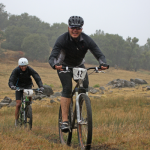