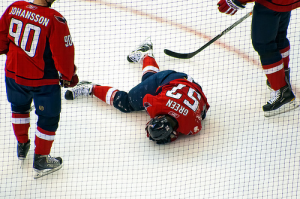 Proper Chiropractic Care for Low Back Pain in Young Athletes

I have recently had patient in my San Leandro Chiropractic clinic, traveling all the way from San Francisco. This is a young male in his early thirtieth with severe lower back pain which debilitating his activities of daily living every day. He has difficulty performing his duties at work as a financial advisor for one of the major banks in San Francisco Bay Area. Most of the day he has to stand around his desk, because both of his feet get numb and the pain gets unbearable. Taking pain medications during working hours does not do him any good as he can not concentrate on his tasks. He had this pain and numbness for the past seven months

He used to play hockey game with his friends. As you all know hockey is a very aggressive and contact sport. This physical activity requires maximum endurance in a short period of time. Many players fall and have multiple sprain and strain injuries that often times being ignored. My patient was not able to play a single game since the beginning of the first symptom.

During this seven months period he has seen a variety of different medical care practitioners. Medical Doctors were only able to prescribe pain medications and refer to other medical doctors such as Orthopedists and Neurologist. From his own words: “It seems like the Medical Doctor do not have any training at all for musculoskeletal conditions.” Physical therapists were trying to strengthen his injured muscles. His Gluteus Maximus and Medius as well as Psoas Major and Tensor Fascia Latae (TFL) were super tight and painful during deep tissue massage. It is counterproductive to strengthen injured musculature. One must heal it first and balance it out, then strengthen it.

During examination I have discovered that his right Sacroilliac Joint is about two inches lower then the right one. His shoulder level and ear level were unequal as well. Basically shoulders and head were compensating SI joint imbalance. All of the muscles mentioned above were not functioning properly. I have advised this patient two weeks of rehabilitation which includes electric simulation and heat for specific injured musculature, Gonstead Specific Manual Adjustment to the entire spine, and deep tissue massage from my CMT. I will publish another post after two weeks period about the results. So far, he informed me that the first session held up much longer then any other therapy he has received so far.