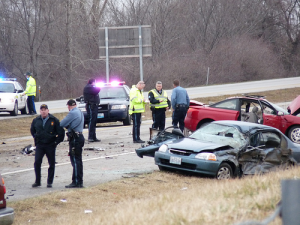 Today’s post is not so much about health but about personal injury case, arbitration and insurance company which does not wish to compensate injured patient after he was involved in a car accident. I had an opportunity to present the case for one of my patients against insurance company which is not willing to compensate him for pain and suffering post motor vehicle accident. Besides my patient and me, the plaintiff attorney was in the room and neurologist who helped to manage the care when the pain level was unbearable for my patient. On the other side was a defense attorney and defense orthopedist (insurance company is using this orthopedist deliberately for reporting purposes only – about this later). The last person was a gentleman who was in the middle of this madness – the Arbitrator.

The arbitration process is not as serious as a deposition or a trial for personal injury cases. The process began by cross examining the patient from defense and plaintiff sides. I was not allowed to be present in the room during this process. The second cross examination was for a neurologist who was co managing the care for this patient. Again I was not allowed to be present in the room during this process. I was a third person to be crossed examined by both sides. Plaintiff attorney began asking me questions about pre and post health condition of this particular patient. The main complaint of the patient was persistent lower back pain which radiated down his left lower extremity. The questions were very specific and were leading to a specific conclusion – that this particular injured individual has never had shooting lower back pain prior to this accident. My thorough documentation has proved that this was the case. When the time came for a defense attorney to cross examine me, that person completely relied on an orthopedist‘s report, which was obviously geared towards the benefit of the insurance company. The problem is that the defense orthopedist spent perhaps at the most thirty minutes with this patient and can not possibly know everything about his health history. Some anecdotal studies and examples were included in the report which had no supportive values for defense attorney and insurance company. Orthopedist does not have much of a clinical experience and is specializing in report writing only. This doctor was called for cross examination right after me.

END_OF_DOCUMENT_TOKEN_TO_BE_REPLACED Anyone can be subjected to whiplash, even in a low-force car crash at speeds as low as 5mph. But injuries associated with whiplash can also result from other mishaps in which the head is pushed or jerked beyond its normal range of motion. Whiplash most commonly causes serious and lingering neck pain, but there may also be back pain, headaches and dizziness. As much as bruising of the brain can sometimes occur in auto accidents. Severe cases of whiplash, may include symptoms such as blurred vision, ringing in the ears, nausea and numbness.
END_OF_DOCUMENT_TOKEN_TO_BE_REPLACED