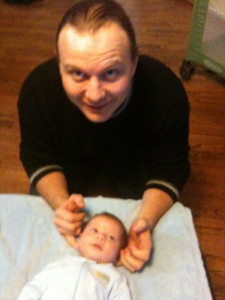 Last week I was visiting my family in New York City. My sister had her third child, beautiful and healthy baby boy – Gabriel. As soon as I saw my nephew my professional eye has noticed that his head was bent to the left at all times. Either he was laying down in his bed or held in hands the position of his head would not change. I could not help myself but perform a digital palpation of this one month old baby and figure out what was happening.

A little bit about the birth history. The first two children were born normally without any complications. However, the third child was born via C section. It is kind of strange because statistically the second and the third child should be relatively an easy birth. Unfortunately for my sister the last addition to the family was positioned wrong and normal delivery via birth canal would not be possible at all. This prolonged abnormal positioning in a mother’s womb was the cause of the left lateral neck tilt.

During digital palpation I have noticed that the paraspinal musculature on a right side of Gabriel’s neck was very tight. He also had very limited ROM when I tried to bend his neck to the right side. After I have finished my examination I figured out that his C6 vertebral level was out of alignment. The newborn’s vertebrae are not ossified and are very small. The best way to adjust and palpate this tiny spine is by using small fingers of both hands.

I guess one video will replace thousand words. Below is a video of an Infant Chiropractic Adjustment.

Right after Chiropractic adjustment I have rechecked Gabriel’s cervical spine and noticed that he had improved range of motion in his cervical spine. You can see at the end of this video a happy smile on his face. I guess it is a sign of my nephew saying: “Thank you uncle.”

This is an article from Parents magazine about Chiropractic Care and Children written by Holly Pevzner who is a mother of two boys.

My dad sees a chiropractor. Some of my runner friends do, to. But babies? And  for crying? It’s true.  “Today about twenty percent of my pediatric patients come in because if colic or digestive issues,” says Elise G. Hewitt, a board- certified pediatric chiropractor in Portland, OR. Baby chiro care is not as scary as it may sound. The adjustments involve short, quick impulses delivered to the spine with hands, as well as using very light touch on the bones of the skull. It’s quite comfortable for the child and can be done while he lies on parent’s lap or chest. “babies often fall asleep during treatment,” notes Hewitt.

Why it may work for you: Soon-to-be published research found that parents were eight times as likely to report a significant reduction in crying when the baby was treated with chiropractic care three or four times over a ten day-day period than if the baby wasn’t, says lead researcher Joyce Miller, associate professor in clinical sciences at the Anglo-European College of Chiropractic, in Bournemouth, England. The theory behind it: The practice helps alleviate tightness and joint issues that were caused by cramped position in utero or during birth. To find a chiropractor experienced with infants, talk to you pediatrician or go to  the website of the American Chiropractic Association